Three daughters of JJ Crosetti, Jr. are establishing an endowment fund in his honor to provide scholarships and local farming grants. 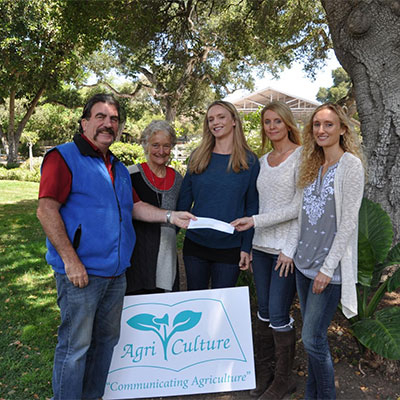 At a press conference held June 15th at the historic Crosetti Ranch, it was announced that the three daughters of JJ Crosetti, Jr. are establishing an endowment fund in his honor. It will be called the JJ Crosetti, Jr. Memorial Fund. The purpose of the fund will be to provide scholarships and local farming grants. The daughters, Lea Andes, Gina Chekouras and Josie Warren, set up the endowment fund through the educational organization, Agri-Culture. The initial $25,000 gift will come from the Crosetti Lands Company, which includes the three daughters, their Aunt, Jeanette Crosetti, and their cousin Rob Johnston. The family plans to increase its contribution in future years and also encourages those who knew JJ to contribute. The endowed fund be housed at the Community Foundation of Santa Cruz County.

JJ Crosetti, Jr. was a local farmer for almost 50 years and had a deep commitment to the community. He was the Santa Cruz County Farm Bureau’s first Farmer of the Year in 1979.Steve Bontadelli, President of Agri-Culture, stated, “This is a wonderful tribute from three daughters for their father who was a special person in our community. How appropriate that it was announced during Father’s Day week.”

Lea Andes and Gina Chekouras, both stated in a prepared statement, “We set up this fund in honor of our dad’s generous spirit and his love of agriculture, so that he can continue to touch the lives of the people within this community that he loved.”

Josie Warren added, “Dad loved this community, and he loved farming; we really wanted to do something in his name that incorporated both.”

Anyone interested in contributing to the JJ Crosetti, Jr. Memorial Fund should send a check payable to: Agri-Culture, designate the fund in the memo section, and send donation to:
Agri-Culture, 141 Monte Vista Avenue, Watsonville, CA 95076